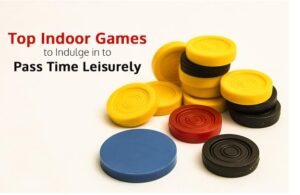 Indoor games are the most fun activities when you are bored inside the house. A dull mind can often lead to doing useless things, so it’s best you use it to do something that is not a chore and would sharpen your normal brain.

In ancient India, indoor games played a crucial role as entertainment for most people. These games have a unique quality to them of being simple yet entertaining. You can play them for
hours and not be slightly bored as they simultaneously make the rivalry friendly and healthy.
In light of these happy and positive facts about indoor games, let’s look at several that you can play with the free time you have at your disposal stuck at home.

Carrom is a game of aiming that is very similar to billiards in its form and factor. You only need a board, a bunch of carrom tokens, and a striker to play carrom. To play this game, players must have a knack for aiming games; and possess power in their fingers or develop it across the many matches they are about to play.

The rules for this game are simple, and you can catch on quickly after a few rounds. Each player chooses a side and pockets white, black, and red coins to score higher than their rival in the game. The red coin is of the highest value in carrom, and after you have pocketed that, you have to drop another coin as a cover to seal the red as your own completely.

There are different shots and strategies to pocket all the coins, so the more you play carrom, the
more you will be able to learn. In recent times carrom is also available to play on your cell phone, and you can download carrom game online by downloading the apps with the highest rating on the app store.

Table tennis is a game filled with activity that makes you more interactive and involved physically than other indoor games. Playing this game in your off time develops concentration which becomes helpful in your day-to-day chores and other constructive work where you might have difficulty focusing. You must try table tennis at least once in your life as it is proven to boost the health of your eyes and sometimes cures long-standing eye illnesses.

The game is centered around a minimal set of rules and is a miniaturized version of lawn tennis. Two to four players can play the game, which is known as singles and doubles. Players play shots across the board unless one misses the ball, in which case the opponent scores the point. Learning table tennis takes a couple of rounds, but it takes hours to master it fully.

This old-school game from our childhood is the one that we have all screamed and begged to play and reminisce about since the days of us being toddlers. Hide and Seek is a game that involves both wit and endurance as core skills for the new player. The best part about hide and seek is that you need no equipment to play this game, and it is mainly played inside the house, where there are more places to hide than the open.

There is no fixed number of players who can play the game, so you can start with a three and go on to five or even ten. One player is chosen as the investigator to find all the hiding participants. The player counts to a certain number while covering their eyes and then declares them open before beginning their hunt. The game is exciting and can go on for hours, giving you the best use of your free. The best aspect related to hide-and-seek is the nostalgia of childhood, which makes it even more enjoyable when you play it as an adult.

Ludo is a board game that anyone can play in the safe confines of their home. This game is easy enough to carry around and requires a small space to keep the board and play. A minimum of two and a maximum of four players can play the game of Ludo, and the game lasts till the final position is declared, making it one of the more fairly played games in the section.

Each player is given four tokens and provided with a dice to play numbers which they can use to move their pieces in the game. The main aim is to reach the final box on your playing grid before the other players do.

Players can use many strategies to move the pieces and capture their rival’s pieces on the board to stop them from winning the game. The more you play Ludo, the more creative plays you will discover that will make your game unique and better than the rivals you come across.

Indoor games are probably the best way to spend the extra time you get every day besides reading books. These games exercise your mind and make you stay healthy both mentally and physically.

Indoor games come in both formats, board games and games that are more physical and require endurance executed in a more tight space. The list has included both games that challenge your mind and body; therefore, you must try them all at your convenience and not spend your leisure time sitting idly doing nothing.